Spend the weekend with some amazing weapons and CONQUEROR’S BLADE

We love some sword and sorcery at the festival and here’s your chance to slash some arse!

My.com are offering you some mayhem and siege warfare. Over the weekend of December 15 and 16, My.com is opening the servers for its medieval MMO Conqueror’s Blade and for the first time anyone with Warlord aspirations will be able to participate by simply registering at cb.my.com. For this special event the game’s developer, Booming, will add new maps and units to the existing siege test build to add variety and allow for even more tactical creativity.

In the “Siege Test: Winter Mayhem” phase, players can create their characters, select one of the medieval inspired weapon specialisations, and learn the art of siege warfare.

New players will receive a king’s ransom in silver to equip themselves and their fresh troops, before diving into the action-heavy multiplayer sieges of Conqueror’s Blade; 15 versus 15 castle assault scenarios in which one team storms the walls while the other welcomes the advancing players with barrages of fire and fury. Spectacular to behold and vast in scale, each scenario offers distinct levels of tactical possibility and replay value. 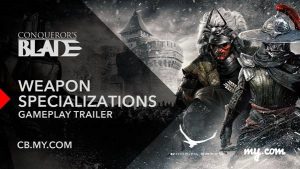 The dates for “Siege Test: Winter Mayhem” are:

The exact opening times of the servers, the exclusive rewards for participation and information on the founder packs can be found: [here]

Conqueror’s Blade is an immersive MMO that mixes epic medieval action and deep tactical gameplay by placing players in the armored boots of a warlord representing kingdoms of the feudal age. Experience a life of military leadership both on and off the battlefield, with strategic and diplomatic choices to make that will determine the ultimate ruler over the battlefields. Warlords choose a combat class that is inspired by Eastern and Western cultures, fight brutal skirmishes and deploy devastating siege weaponry to take down castle walls. Players form alliances, craft impressive armor and field iconic troops – build massive armies and conquer a resource rich world for the glory of their house.