We are delighted to present a talk with master editor, Colin Goudie, on his work and practice.   With a look at some of his latest projects including a biopic on Roald Dahl and Alan Moore’s latest film, Colin will talk candidly about the art of editing.

If you have any questions about editing techniques or Colin’s work, drop us an email and we can pass them on, hopefully yours will get dealt with on the live show! 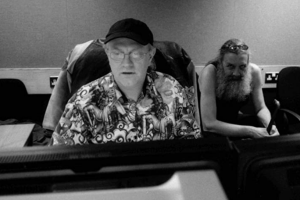 Between Monsters and Rogue One, Colin edited the groundbreaking series of shorts “Show Pieces” for Mitch Jenkins and Alan Moore and the team were reunited on the feature The Show which premiered in 2020 to great acclaim at the Sitges Film Festival.

He has most recently completed To Olivia a biopic on the marriage of author Roald Dahl and Patricia Neil starring Hugh Bonneville and Keely Hawes.

A graduate of the prestigious Bournemouth Film and TV school, Colin has edited numerous shorts including the award-winning It’s Snowing Outside for Writer/Director Rayne Roberts (Vice President of film development at Lucasfilm.)  Deus Otiosus – The Idle God for Mat Braddy, winner Best SciFi at the Paris Short Film Festival 2020, which was edited entirely in Lockdown.  Colin also Co-Produced the dazzling Sci-Fi short “Cognition”for Ravi Ajit Chopra starring Andrew Scott (Spectre) and Jeremy Irvine (Treadstone) which premiered at the Archlight Cinemas this autumn and was featured on BBC News.

Award-winning TV series and feature films including Holy Cross for which he won the Royal Television Society award for Best Film Drama Editing.  His other productions include the BBC Series Between the Lines, which won the BAFTA for Best Drama series and the award-winning indie feature film Man Dancin’ (released in the USA as Kerrigan’s Passion).  Funny You Never Knew, starring Kevin Pollack and Fred Willard (The only human to appear in Pixar’s Wall-e), winner of the Best Editing award at the 2019 Newport Beach Film Festival.

Colin has lectured on the craft of editing at BAFTA, the British Film Institute, The National Film Theatre, the prestigious Northern Film School, the Leith Edinburgh Film Festival, the South by Southwest Film Festival, the BBC’s Producers Academy and as far afield as the University of Victoria in Wellington New Zealand to students and members of Peter Jackson’s company WETA.

Colin splits his time between his home town of London and his rural retreat in Argyll, Scotland.