To mark Dan Dare’s 70th anniversary in style B7 Media has teamed up with SCI-FI-LONDON for a very special ‘LIVE’ table read of Colonel Dare’s first-ever adventure, VOYAGE TO VENUS. Spaceship Away!!

For more information on DAN DARE and many other great audio titles, check out B7’s Media page 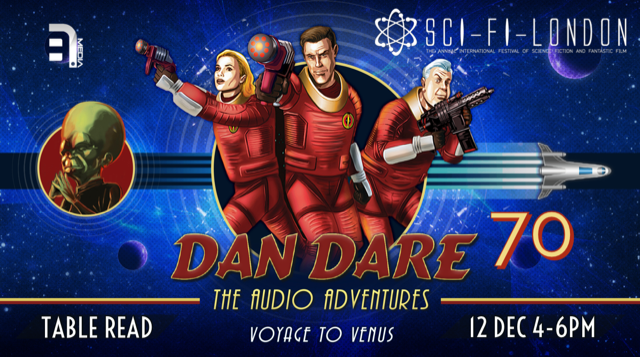 VOYAGE TO VENUS
Written by Richard Kurti and Bev Doyle. Based on the Eagle Comic Strip
Created by REV. MARCUS MORRIS and FRANK HAMPSON

Brilliant test pilot, Dan Dare, is chosen to fly the Anastasia – a new experimental spacecraft – on its maiden voyage to Venus. This isn’t exploration – it is to make first contact with a mysterious civilisation that has sent technological secrets as a goodwill gesture. However, what Dan, Digby and Professor Peabody find on Venus isn’t goodwill, but a terrifyingly intelligent, cold-hearted ruler, the Mekon. A creature destined to become Dan Dare’s nemesis – and Earth’s greatest threat…

Other roles were played by members of the cast.

Based on the Eagle comic strip “Dan Dare” created by Rev. Marcus Morris and Frank Hampson