Earth is on the brink of an environmental disaster. The population has risen to more than 20 billion and huge areas of the planet are uninhabitable. Against this backdrop, a massive black sphere is discovered in the orbit of Mars. The Sphere begins to transmit a single word in each of Earth‘s languages: Deus (God).

Commercial spaceship, The Achilles is sent to investigate but, on approaching the red planet, it becomes damaged by a strange beam of light emanating from the sphere. Will the crew survive and discover the origin of the sphere and its purpose?

We are delighted to have the World Premiere of this British sci-fi, screening at the festival 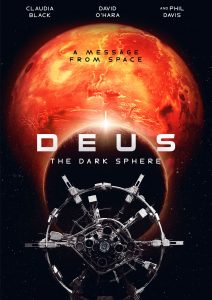