DOCTOR WHO AM I

DOCTOR WHO AM I

Documentary filmmaker, Vanessa Yuille (in her debut feature) follows friend and co-director, Matthew Jacobs (British writer of the 1996 TV movie, Doctor Who) as he is reluctantly pulled back into the fandom that rejected his work 25 years earlier.

The journey not only becomes hilarious and emotionally perilous for the duo but also reveals a touching and quirky face-off between the American Doctor Who fans and Matthew himself.

As they explore the fandom, Matthew unexpectedly finds himself a kindred part of this close-knit, yet vast, family of fans. The documentary deals with the desire to belong to a community, and how people can become nourished and enriched by the experience.

WE ARE EXCITED TO ANNOUNCE THAT MATTHEW AND VANESSA WILL BE FLYING OVER FROM THE USA TO JOIN US AT THE SCREENING!!!

We are excited to have the directors with us for the world premiere of this fun, informative and very touching film.

Who is your Doctor? 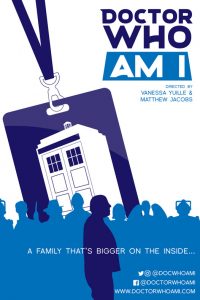