After a pandemic has left the planet devastated with insufficient resources to maintain the human population, the totalitarian governing body, The Bureau, has set up ‘The Deal’. The terms are simple: accept The Deal, and you’ll have work, a home and medical care for the next twenty years. At the end of the time period you must sacrifice your life for the greater good.

TALA took The Deal when she was pregnant. and has spent the ensuing nineteen years selflessly raising her daughter, ANALYN so that she would never have to take The Deal herself. Just five days before Tala is scheduled to die, Analyn becomes very ill. A life-saving procedure with Tala as donor is beyond their financial means and so begins their adventure to find a way to avoid The Bureau and keep them both alive.

Drawing on themes in Logan’s Run and Soylent Green, this is a slick, fast-paced thriller.

We’re delighted that former SCI-FI-LONDON 48hr film challenge winner, Emma Fischer, stars in the movie and will join us for a post screening Q&A.  With Alex Fitch as moderator. 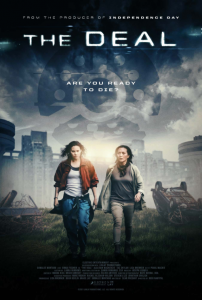