The High Frontier: The Untold Story of Gerard K. O'Neill

Gerard K. O’Neill was a physicist and space colony pioneer. In 1977, O’Neill wrote The High Frontier: Human Colonies in Space. This book sparked an enormous grassroots movement to “open the high frontier” to make space available and beneficial for all mankind.

The film is told through “Gerry’s Kids”, as they affectionately call themselves; his peers, family, and the younger generation who followed that movement and are now in charge of the modern-day space industry.

Steve Dodd has painted space scenes since the 1970s. Working at home with no phone, internet or computer, he has created hundreds of beautiful ‘spacescapes’: visions of a positive future amongst the stars. This is his first recorded interview.

Everyone involved with the film hopes to keep Gerry’s dream alive and see a day where “O’Neill Cylinders” are above our own heads! 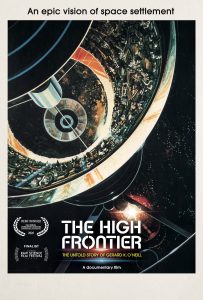