From the director of BLIND and THE WORST PERSON IN THE WORLD, this is an outstanding piece of cinema, but not for the faint-hearted.

During a bright Nordic summer, a group of children reveal their dark and mysterious powers when the adults aren’t looking. In this original and gripping thriller, playtime takes a dangerous turn.

Unlike in Wyndham’s The Midwich Cuckoos, these kids are not ganging up on their adult carers. At times reminiscent of the more teenage CHRONICLE, the simplicity of the sparingly deployed effects adds realism that will haunt your imagination long after watching.

“A clever, engaging and often electrifying feature which straddles suspense and the arthouse in a tight and satisfying way.”
Fionnuala Halligan, Screen. 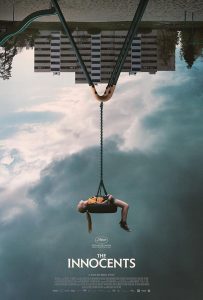